Meetings notes are on the OBIS web site from the eight meetings so far. The next meeting will be in November 2020 in Belgium.

To extend and enrich the types of data that can be published to OBIS, the OBIS Data Content Enhancement Task Team (DataTT) devised a revision and extension to Darwin Core to handle events (e.g. trawls) and associated abiotic data (See Resources for the publication). There are current efforts to publish data using this new format. For example, the Australian node has published seabird observation datasets that incorporate sea and air measurements and bird behaviour observations. An instance of this is the RV Investigator Voyage IN2016_T02 Seabird Observations, Australia (2017) on the OBISAU IPT and online at OBIS.

There was an OBIS workshop in April 2018 on handling animal tracking data using this new standard. This will be applied to existing tracking data in the near future.

The Australian Ocean Data Network (AODN) is the main portal of aggregated oceanographic data within Australia. It has been built using the architecture of the Integrated Marine Observing System (IMOS) facility and is dominated by physical datasets with a few key biological datasets that are projects funded by IMOS. What is missing is the integration of non-IMOS biological data can be integrated from ALA, GBIF and/or OBIS.

There are two major issues to solve

OBISAU has built a Geoserver mapping layer called dwc:marine_species. It is a potential method to get species data into the AODN portal. Subsetting the data can be achieved using a CQL filter and for the IN2016_T02 Seabird Observations, the CQL syntax is &CQL_FILTER=dwc:RESOURCE_LINK=%27http://ogc-act.csiro.au/ipt/resource?r=in2016_t02_wov%27

To potentially solve this conundrum, AODN sponsored a project in 2018 where one component of the project was to address how marine biological data could flow seamlessly between OBISAU, OBIS, AODN, ALA and GBIF. The final report Biological Data Work Flows describes the services to identify potential data to exchange between ALA and OBISAU, how to handle data if it is lodged at any particular node (with the aim not to replicate it) and some best practices. The following diagram, described in the report, highlights the relative complexity of the data network in Australia. The blue line indicates the optimal data flow given the constraints outlined in the report. 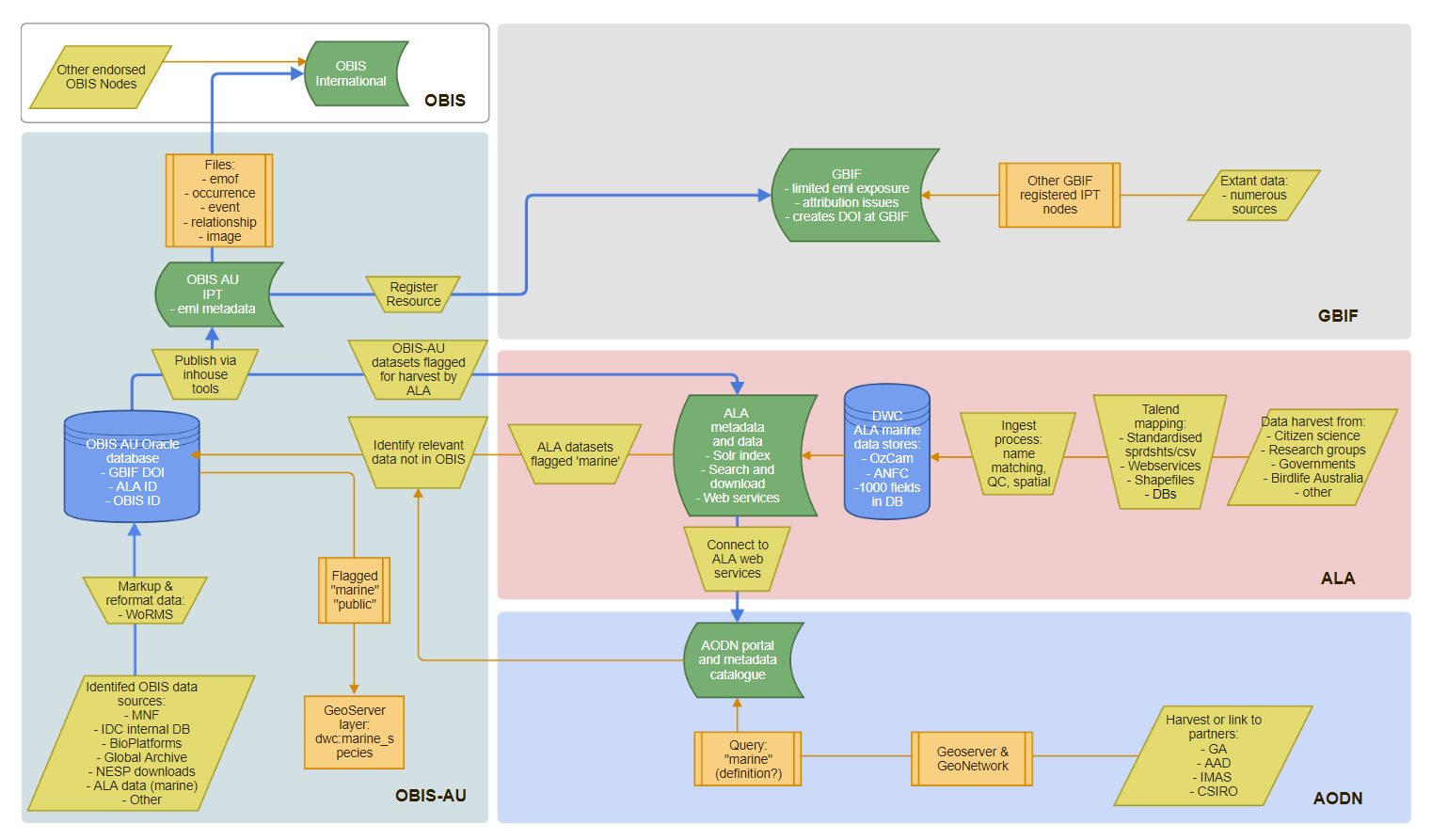 Many tests that check the quality of biological data are informal, ad hoc and under-applied and therefore can miss errors The TDWG Data Quality Interest Group has constructed a suite of tests and assertions that can be applied to a single record or a set of records. Examples are invalid or incomplete dates, geospatial outliers or bad coordinates, suspect depths or elevations, unknown or missing taxa values There was presentations on this topic at the TDWG 2018 conference.

The old OBIS data portal was built from data being harvested from its endorsed nodes about four times a year. The problem with this approach it would take 3-4 months before a new dataset appears at OBIS. GBIF on the other hand has been harvesting data immediately once a dataset has been registered with them and within 24 hours it will appear on their data portal.

The OBIS 2.0 project has had the goal to be responsive to new data and to improve the real-time validation and testing of that data. In late 2018, the new OBIS portal was released along with a domain name change to OBIS.ORG. Other changes is that OBIS no longer harvests data from DiGIR nodes. Some of the older diGIR data has been archived at OBIS waiting on OBIS nodes to take ownership. The next steps will involve improvements in mapper, dealing with 'absent' data records, handling EMoF data structures, use of vocabularies and better searching.

This site is hosted by the CSIRO National Collections and Marine Infrastructure Information and Data Centre, Australia. Please advise any problems with this website to the OBISAU Node Manager.    View Privacy Statement